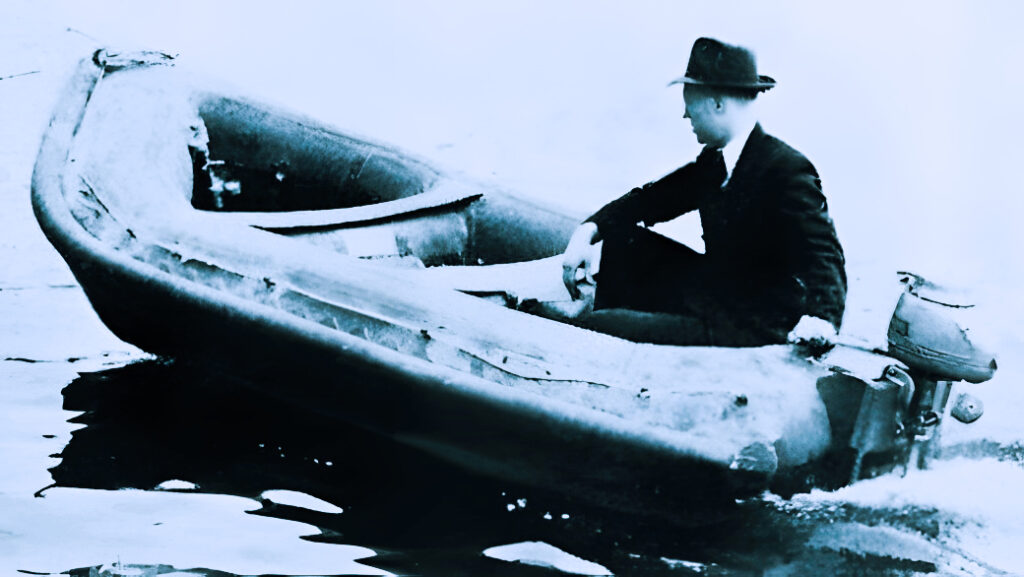 Driven by patriotism, there was a time when outboard manufacturers had a common mission: to help the Allies cross the river and defeat the Nazis.

September 17, 1944 European battlefield: After the Allied forces landed in Normandy to open up the second battlefield, in order to defeat Nazi Germany as soon as possible, the Allied forces wanted to end the European battlefield operations before Christmas 1944. The purpose of Operation Market Garden was to capture and control key bridges on important waterways, ending at the Rhine in Arnhem, which would open access to the heart of Germany and be victorious. British General Montgomery launched the largest airborne operation in the history of human warfare. However, the German troops were already deployed in the area where the Allied forces were scheduled to land, and the advance of the team was slow.

Antique outboard collector and historian Larry Stevenson said: “The original idea of the Allied forces was to drop the paratroopers directly on or near the bridge in order to seize control.” The fire barrier gets there. Major General John Frost and his men managed to reach Arnhem Bridge, where they occupied one side of the bridge, but ran out of ammunition and were forced to surrender four days later.

Meanwhile, west of Arnhem, another 2,200 British First Airborne troops never reached their destination. They ended up being trapped by the Germans on the Rhine, about half a mile wide, with the end of the day imminent.

Fortunately, the Allies had a way to save them—storm boats, 16-foot plywood boats with 250-pound, 50-horsepower Evinrude outboards. At the time they were trapped, the landing craft were still in Belgium and had to be loaded into trucks and travel 60 miles under enemy fire to reach the river. Getting the boat into the water is another feat. “They had to lift these boats over a 20-foot levee and they were driving there,” Stevenson said. They ended up crossing the river in the middle of the night and rescued all 2,200 soldiers.

When the U.S. entered the war in 1941, the nation was in dire need of troops, supplies, and funding, which meant full cooperation between government, business, and citizens. In order to get the American people to support the war, the government continued to carry out propaganda, attract young people to join the army, and purchase supplies on a large scale. A fleet of landing craft was also needed before the United States could enter Europe.

Landing craft, also known as assault craft, were designed by the British and built in the United States. Troops need a way to cross major rivers, as enemies will blow up bridges behind you at any time. Just before the United States was ready to begin operations in Europe, General Eisenhower requested 400 additional landing craft; at the last minute, WC Meloon, founder of Pine Castle Boats in Pine Castle, Florida, was awarded the contract. Streets were closed and saw horses erected throughout the city. To get the job done, Meloon and his men worked 24 hours a day except Sunday, and the three-week deadline came, Meloon kept his word, and 400 more ships from the U.S. were going to Europe.

The bottom of the plywood boat is ribbed, making it strong enough to be less prone to damage when colliding with obstacles. The boat’s design features also its power section — a 50-horsepower Evinrude outboard (boats in the recreational market typically come standard with a 5-10-horsepower engine. “They need a 50-horsepower engine,” says Stevenson. horsepower, because a river like the Rhine has eight knots of water.” “If you row across the river like it’s in the movie, and by the time you get to the other side, you’re down five to ten miles, and the Germans just waiting for you there!”

The ships were operated by two combat engineers, one at the tiller and the other at the bow. As they moved, nine soldiers lay on the bottom of the boat. Charged to the enemy beach at 25 miles per hour, nine soldiers immediately disembarked and began to fight. Then, the sappers would turn the bow and pull the rest of the troops across the river, repeating this movement until everyone had crossed the river.

Landing craft were vital to getting the Allies across Europe, but outboards were used in the war long before they were built. They were initially used to power portable water pumps and fire pumps, as planned by the National Park Service.

The government wanted a rig that could be placed under the deck of a large ship and could be used as a fire pump or to drain a cracked hull. They contacted a marine supplies company, the largest distributor in the Northwest, that developed a design that would later play a key role in the war.

The first pump used two Johnson a-series outboard heads, Stevenson said: “They were light and strong, but only had 4 horsepower, and they needed 8, so they spliced the two together, welded the The crankshaft was made and a four-cylinder outboard was made, which served their purpose.

The water pump was successful, and the Navy tweaked the design to add a hose to the deck for ventilation. Throughout the war, these pumps contributed to the survival of countless ships, including the US Navy destroyer USS Laffey, which was attacked off Okinawa, Japan. Portable pumps drained 90,000 gallons of water from the ship, allowing Rafi to survive the D-Day landings and the Battle of Okinawa, earning it the nickname “The Ship of the Undead . ”

Johnson outboards are also used to build pontoons in Europe. The Johnson PO15 is a 22 hp engine mounted on a pontoon rear tailgate. “The other end of the pontoon is upstream,” Stevenson said. With the current (currently) at 8 knots and the engine set at 8 knots, this section of the pontoon can remain relatively stationary. They’ll anchor that part to the ground, and the outboard will move on. Then link the next section of the pontoon, match it at 8 knots, and fix the section. According to Stevenson, sometimes the military will lay pontoons with 100 sections of pontoons and 100 of these outboards.

If the outboard fails, the force of the river water will rip the pontoon in two. After the pontoon was laid, the ordnance would use a motor upstream to fasten the anchors to the steel cables in the silt, then pull the cables downstream and fasten them to the bridge. This makes the bridge safe enough for trucks, tanks and infantry to pass through. Without this project, advancing in Europe would have been nearly impossible.

While Evinrude and Johnson helped the Confederates cross Europe, other outboard companies also contributed to the war by supplying parts. As the country struggled to procure vast quantities of lumber from the Pacific Northwest to prepare for war, Carl Kiekhaefer of Mercury, USA, designed a two-person, six-foot chainsaw. The chainsaw is powered by an air-cooled twin-engine outboard. Kiekhaefer personally promotes his new chainsaw throughout the Pacific Northwest, challenging professional loggers for a logging PK. Before the war ended, Mercury was the largest chainsaw manufacturer in the world.

The outboard also powered the world’s first drone, saving the lives of countless pilots. Reginald Denny, a successful Hollywood actor and model aircraft enthusiast, teamed up with aircraft engine pioneer Walter Righte to create a flying remote-controlled aircraft. Before that, Danny was only interested in aircraft models, but his pursuit of designing aircraft models was important to the military, as the military wanted to find a way to reduce pilot mortality while flying missions, Ground gunners at the time often practiced firing anti-aircraft guns at tumbling targets. Unlike the lethal drones deployed by the military today, these “Radioplanes” are unarmed and designed to keep pilots out of danger. Radioplanes and their engines changed everything.

“They had two-cylinder engines, and later four-cylinder engines, all from outboard manufacturers,” Stevenson said. The engines powered the plane with six horsepower. The Army ordered the construction of thousands of Radioplanes. Among the factory’s assembly workers was a young woman named Norma Jeane Dougherty, whom Army photographer David Conover first photographed in 1945 after being sent to write about Radioplanes for the military newspaper Stars and Stripes . It was there that Norma Jeane Dougherty’s modeling career began, and she later changed her name to Marilyn Monroe.

Outboard technology propelled the Allies to victory, and while there is no certainty that the war would have been won without them, they saved many lives and their contribution was immeasurable. “Eisenhower thought we were really going to have a hard time winning the war without outboard gear,” Stevenson said. “If you were rowing across the river the traditional way, it would be impossible.”

The Germans also had their own dingoes (landing craft), but with a completely different outboard design. The engine is mounted horizontally on the transom, and the shaft cannot be lowered but pushed straight. “The guy with the tiller had to be very strong, because the propeller was 10 feet to the bottom of the boat,” Stevenson said. Those engines couldn’t compare to the Evinrudes engines of the Allied landing craft. The Japanese also have outboards, but they are made by an aircraft company that doesn’t meet their requirements and the quality doesn’t compare. Differences in outboard warfare between enemy nations mean different stakes to protect armies, conquer land, and win the war.

Outboards helped win the war, and with it an industrial boom. Before the war, most outboard engines were no more than 5 to 10 horsepower fishing engines. After that, the middle class came with the GI Bill and a vibrant economic market. Water sports are growing in popularity and there is a new need for outboard power. A horsepower race between outboard companies began, and by 1958 consumers could buy 50-horsepower outboards. In 1962, Mercury introduced the world’s first 100-horsepower outboard engine.

Stevenson donated his collection of more than 200 vintage outboards to the LeMay Family Collection in Tacoma, Washington, many of them from World War II, where the public can see them. This series allows us to see how innovative a 50hp landing craft outboard can be, or how much impact a 22hp rowboat engine can make, especially when the stern typically comes with hundreds of horsepower. Outboards infiltrated every aspect of the war, helping the Allies win.