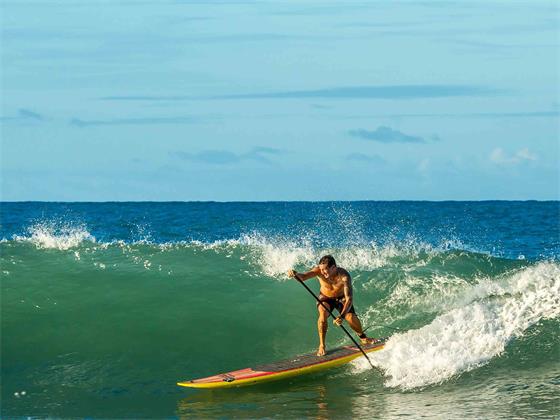 What Is the SUP Sport?

Paddle board surfing (SUP) is also known as Stand UpPaddle. SUP is a sport originating from Hawaii in the United States and has been popular all over the world in recent years. Initially, in order to manage a large number of students, the surf instructor can stand upright on the surfboard for a better view, to facilitate observation of the surrounding situation, and to facilitate the rushing waves in the distance. There were no special SUP surfboards at the time, using ordinary length surfboards and single-sided paddles. The contemporary SUP movement is also popular with the Hawaiian Islands, just like surfing. In the early 1960s, a group of Hawaiian surfers named “Beach Boys of Waikkiki” took photos on the extended surfboard for surfers. Therefore, “Beach Boy Surfing” is another name for SUP.

The equipment required for the SUP movement has two plates, one for the paddle. First of all, there are many kinds of boards, which are roughly divided into SURF (suitable for surfing), TOURING (suitable for travel), RACING (for competition), and YOGA (for yoga). The paddle can be divided into three parts: the handle, the handle and the paddle surface. Generally, the paddle can adjust the height. For the beginner, the height is roughly that you can hold the paddle and can hold the fist, or 8 to 12 inches higher than the height.

The water sports originating from Hawaii in the United States are becoming the fastest growing entertainment sport in the world. Almost all places where there is water can do this sport. The sport uses surfboards and paddles to surf on the surface of the water, testing the power and coordination of people, and catching the hearts of anyone who loves water sports. This sport appeared earlier than surfing and is available to most people. There are even people who do yoga on paddle boards. The popularity of the SUP sport is not only reflected in the fun on the water, but it is also an easy-to-learn, sporty game for all ages. All SUP courses such as swiping turn can be introduced in an hour and it applies to Various waters and people of all ages. Mainly reflected in the following two points:

1–Different from the surfing that non-professional players can’t get, the paddle board is more generous, so it’s easier to balance, and the operator has an extra paddle in the hand, which effectively avoids the athlete’s arm. The two most difficult surfing techniques for water skiing and standing up, even rookie players can get started right away.

2–It must be completely different from surfing in the presence of waves. The paddle can be accelerated by paddle even in the absence of waves, so even in inland rivers and lakes, as long as Where there is water, the paddle board movement can still be carried out, which is basically equivalent to standing and rowing, and the physical exercise is more obvious.

At present, in the warm coastal tourist resorts of the world, the trend of SUP is unstoppable, and because it is sought after by many professional surfers, celebrities and stars, SUP sports can be seen in safe waters that can be found all over the world.

NextWhy to Choose the Electric Outboard Boat Motor for Your Boat?Next