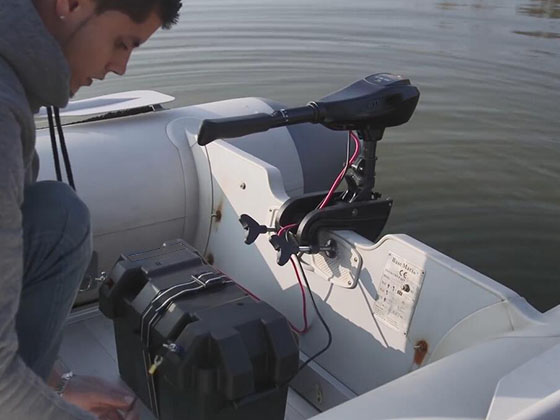 Why Are Electric Boat Engine Powered By Lead-acid Batteries?

There are two kinds of batteries for the electric boat engine, which are lead-acid battery and lithium battery. They have unique features from the perspectives of weight energy density, volumetric energy density, service life, price, applicability, national policy, etc.

The lead-acid battery has good low-temperature performance and high current performance. When discharging at 10C rate at -10 ° C temperature, the voltage above 10V can be held longer than 90s. It is enough to cope with harsh environment in most areas. While the low-temperature performance of lithium-ion batteries is much worse. The discharge performance at low temperatures will be drastically attenuated. And it is difficult to achieve practical applications in low-temperature areas. Secondly, the high current characteristics, the instantaneous current is relatively large when the motor starts up. And the high power motor may be higher. As for the current positive and negative materials of lithium ion battery, graphite and lithium cobalt oxide, neither of them belongs to the high-power anode material. The performance is drastically lowered at high power. So, lithium batteries are not suitable for use in low temperature environments. While lead acid batteries will perform much better in this areas.

The safety of lead-acid batteries is extremely high in current battery systems.

1) The high current performance means that the battery is not prone to accidents.

2) Even in the event of an accident, the positive and negative materials are lead compounds. The electrolysis liquid is also a sulfuric acid solution. They are not flammable, and can only cause the surrounding parts to burn. The negative electrode material of the lithium ion battery is graphite, and one kind of carbon material is a flammable substance. The electrolyte is an ester solvent and a lithium salt. The ester solvent is not only flammable but also extremely volatile. Once a large amount of heat is released or is likely to be burned or even exploded during a collision, collisions are inevitable when driving a ship. Once the consequences of the explosion are unimaginable.

3) Lithium-ion batteries tend to form lithium dendrites in the negative electrode during high-current discharge. Causing internal short-circuit and explosion of the battery. It is a consensus in the lithium battery industry. In fact, many other problems exist. One big problem is the stability of the electrode material, caused by the long-term high state of charge (SOC) of the battery.

People said that lead-acid batteries polluted the environment, lithium-ion batteries were environmental friendly. In fact, this is a big misunderstanding. At present, the best part of lead-acid batteries is the recycling mechanism. Lead-acid batteries are now used in the field of engines and start-up power supplies. These two areas are highly targeted, that is, users return to special stores to change batteries when changing batteries. Why? You can exchange old batteries into money and buy new ones! The lithium-ion battery contains less heavy metals. Only the positive electrode material contains cobalt metal. But it has a large user volume in the world. In the long run, this is still a problem, but there is no mechanism paying attention to this issue, no mechanism recycling lithium batteries.

In summary, although the lithium battery is small in size, light in weight, and long in service life, it is still used in mobile phones, tablets, and computer batteries. For large devices, they currently in the market use lead-acid batteries. In terms of applicability, safety and cost, lead-acid batteries are still superior to lithium batteries as an energy source for electric boat engine.

PrevPreviousHow to Extent the Service Life of Electric Fishing Motors?
NextHow to Choose The Right Trolling Motor for Your ShipNext